Historically known as Constantinople and Byzantium, the capital of Turkey, Istanbul is also its largest city. Istanbul lies between Asia and Europe, straddling the Bosphorus strait between the Sea of Marmara and the Black Sea.

The climate in Istanbul is a modified Mediterranean climate with hot and somewhat humid summers with little rainfall, and cold, wet winters.

In the spring, April, May, and the first half of June are the best times to visit Istanbul. You can swim in the waters around Istanbul through September. The Judas tree groves along the Bosporus are ablaze with the characteristic purple in the spring. March is cool and rainy, but you'll be fine in April and May.

Expect morning haze in Fall, but nice temperatures will be found through mid November--expect some rain, though.

Winter in Istanbul can bring snow; expect the average of 7 snow days December to March.

Istanbul is often breezy, with winds coming from the north or south.

The chart below shows the historic high and low temperatures in Istanbul, with the rainfall below that. 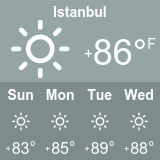